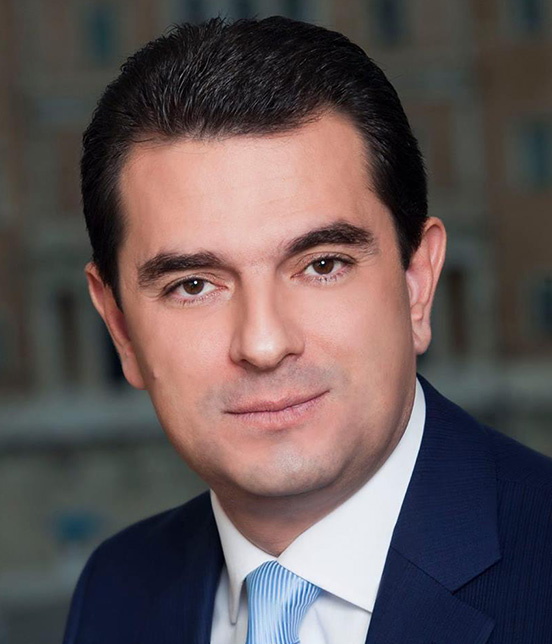 Konstantinos Skrekas comes from Megarhi, Trikala. He is married to Eirini Karagouni  and has two daughters, Alexandra and Sophia. He holds a Degree in Civil Engineering from the Aristotle University of Thessaloniki  (Civil Engineering Department, Faculty of Technology), and an M.Sc. in  Construction Management from the University of Birmingham, UK. After completing his studies, he worked in the Fast Moving Consumer Goods sector in managerial positions. He is the co-founder of a company operating in the FMCG  sector and held the posisition of CEO for 15 years. In the general election of 6 May 2012 he was elected Member of the Greek  Parliament (MP) for the Constituency of Trikala with the New Democracy Party. He  was re-elected on 17th June of the same year.

On the 25th of January 2015 he was elected Member of the Greek Parliament (MP),  receiving the largest number of electoral votes among candidates from all political  parties, in the Constituency of Trikala. He was re-elected in the elections on 20th  September of the same year. In the general elections on 7th July 2019 he was elected Member of the Greek  Parliament for the Constituency of Trikala. During his terms of office in the Hellenic Parliament he has been a member of the  Standing Committee on Economic Affairs, the Standing Committee on Production  and Trade, the Special Permanent Committee on Research and Technology and the  Special Permanent Committee on Environmental Protection. He was also Shadow Minister for the Environment and Energy Sector for the New  Democracy Party from January 2016 – June 2019.  He was appointed Minister of Development and Competitiveness from October 2014  until February 2015. On 9th July 2019 he was appointed Deputy Minister of Rural Development and Food,  being specifically responsible for the Common Agriculture Policy (CAP). On 5th January 2021 he was appointed Minister of the Environment and Energy. He speaks English and French.