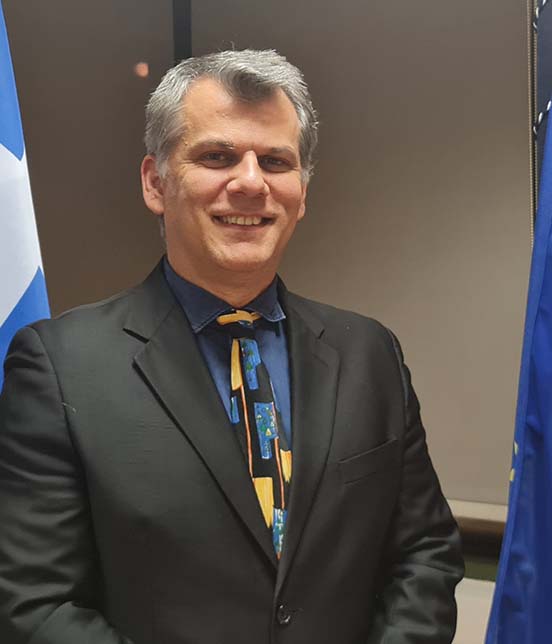 Antonis Marinos was born in Athens in 1973. After completing basic education, he was admitted to the National Technical University of Athens at the School of Electrical and Computer Engineering, from which he obtained the Diploma in Engineering in 1998. After completing his military service as a Reserve Second Lieutenant of Communications, he began a PhD Thesis at the Medical School of Athens on Artificial Intelligence, and in particular on Experienced Systems of Automatic Diagnosis. He holds an MBA degree, as well as a certified Project Manager Professional (PMP) from the Project Management Institute.

His working career began as an editor of a periodical in Athens in the field of Informatics, Computers and Multimedia since 1993, with numerous articles, tests and presentations on ICT, until 1998. He then worked as an executive of Oracle Greece, as a project manager in a technical construction company, before moving to Brussels, as an executive of the European Commission, and in particular of the General Directorate of Regional Policy, as a desk officer of the Cohesion Fund’s Transport projects for Greece.

In 2004 he returned to Greece and until 2009 he worked as a Consultant in the General Secretariats of the Ministry of Economy and Ministry for Development, having managed a variety of actions and projects, such as the design of the NSRF 2007-2013, all of the construction projects of the Cohesion Fund, “Exoikonomo” for Local Authorities, “Saving at Home”, “Allazo Klimatistiko”, the creation of the Energy Efficiency Regulation (KENAK), etc. Since 2009 he is a member of MOU S.A. as a Computer Engineer for the implementation and management of ICT work. During the period 2012-2013 he worked as an Advisor to the Minister for Maritime Affairs. Since September 2019 he has been working as Head of Office at the General Secretariat for Energy and Mineral Resources.

Ministry of Environment and Energy